Hi Everyone Flossie here! hope you are all having an awesome week so far and are really excited because we are on the COUNT DOWN TO CHRISTMAS !!!!!!!!!!!!!!!!!!!!

I am super excited for Christmas and even though we have no more fires in the house because we have banned all fires in our house due to carbon emissions, we will especially miss the big open fore this Christmas !! I hope you all have an amazing Christmas… but as sustainable as possible!as well! Anyway lets get into this weeks blog!

On Thursday night I did something I have alwayse wanted to do………. I turned on the Christmas lights in Glasthule and Sandycove! IT WAS SO MUCH FUN!!!!!!!!!! When we arrived I got into a vintage car with the owners of Fitzgeralds and the owner of the Cavistons, which is this delicious shop that sells the most yummy food!

Then I made a short speech and we turned on the lights… it was so cool !

This week my friend and I stayed in a hotel in Wexford called ‘Amber Springs!’ I was there in August launching there ‘Going Green’ campaign and as a gift they gave me a night’s stay at the hotel. It was so awesome… there was a cinema at night and a swimming pool and instead of having plastic bottles in the room they had a refill station it was brilliant! 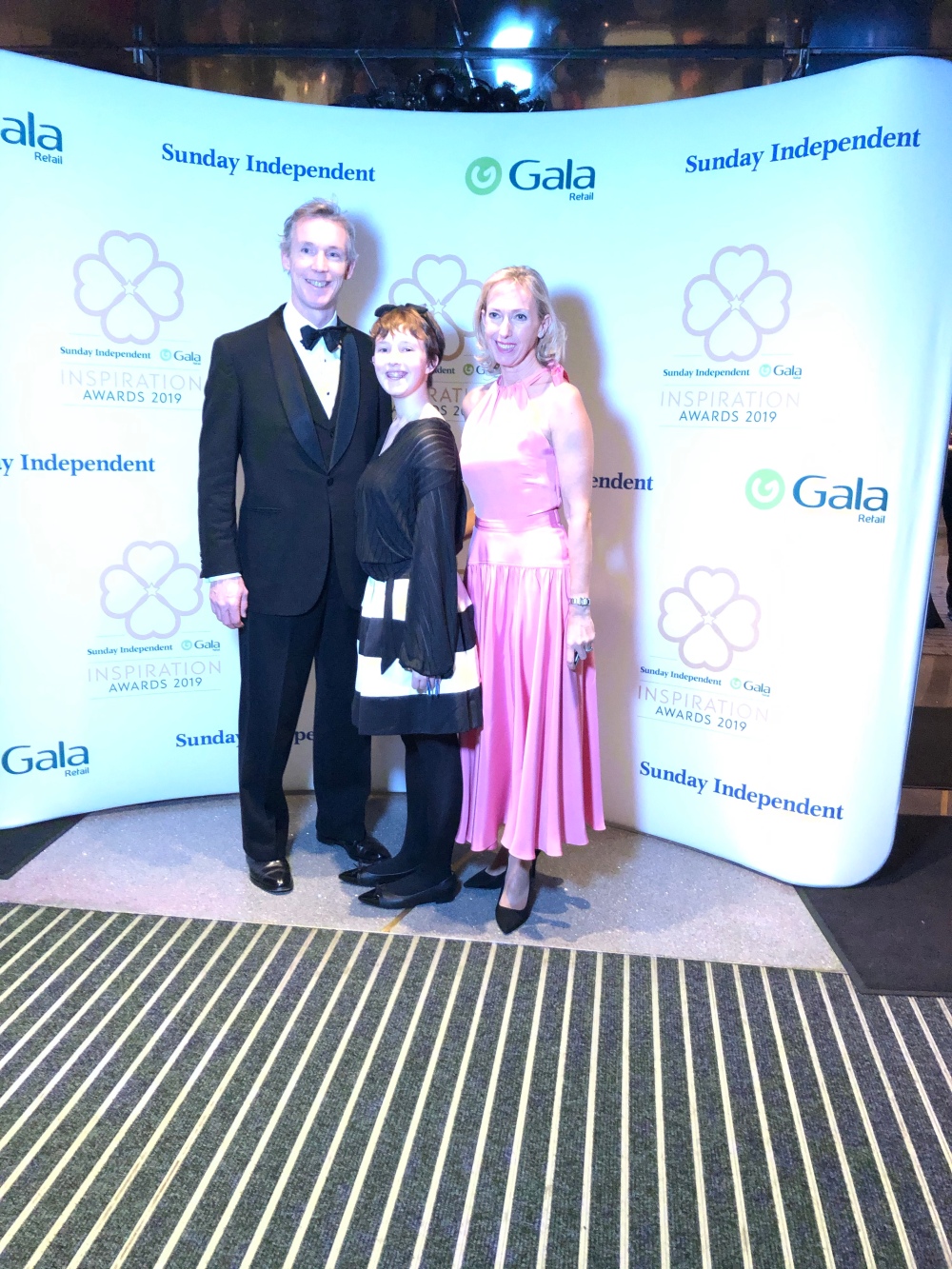 Last week I went to an award ceremony and it was super exciting and fun, I also met so many amazing people including this lovely women called Pat who has a really cool sustainable shop called Reuzi in Foxrock!

She was so nice and so cool and we were in the same category of the competition!  It was amazing but what I didn’t expect was that I would win…I was so excited and totally surprised ! The next day we went to Pat’s shop because she was having a swap shop which was so fun! Its where you bring your clothes you aren’t going to wear anymore and swap it with other peoples clothes! My mum and I got so much and we also got stuff as presents! 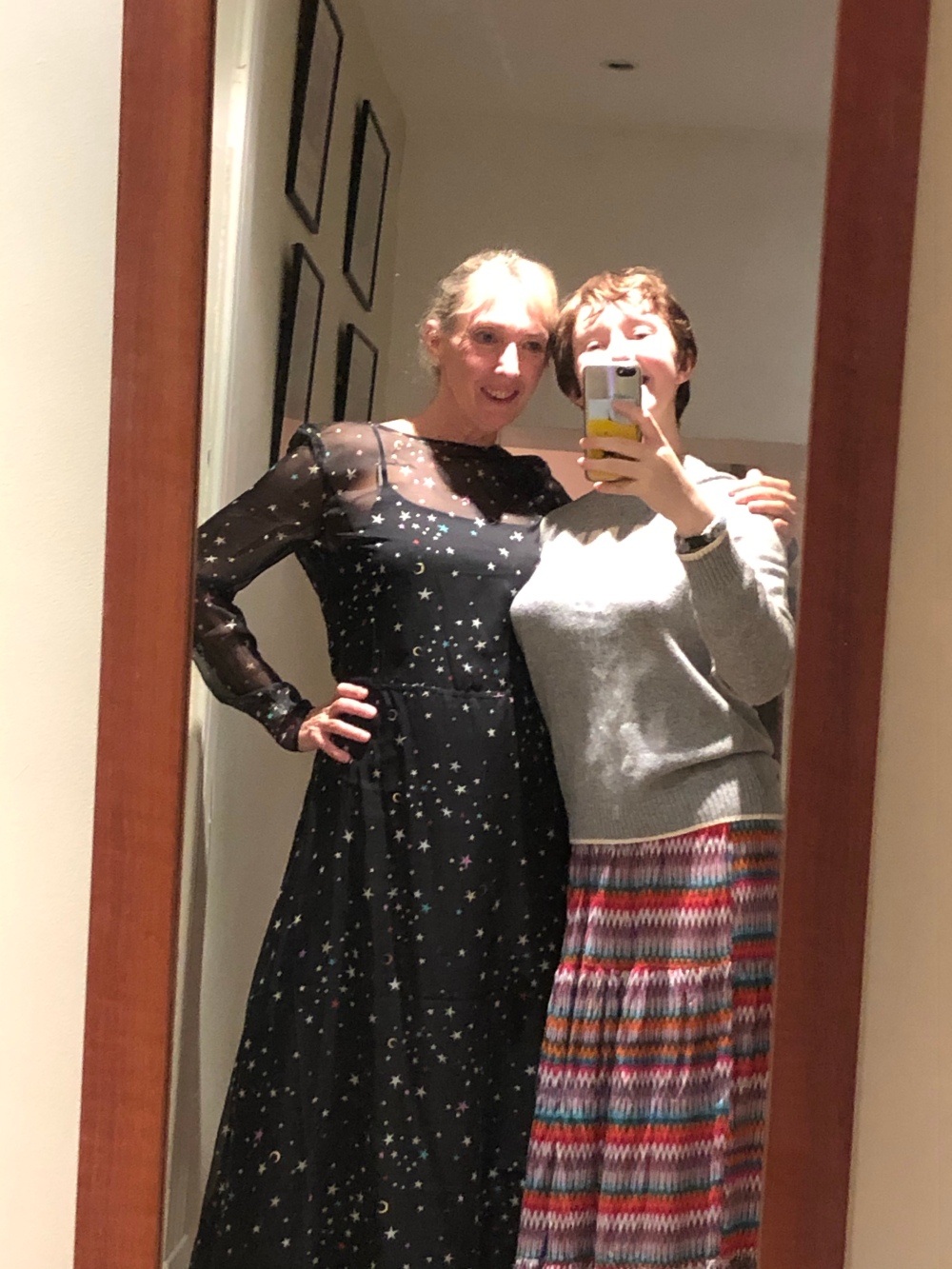 I did a beach clean a couple of days ago with my Mum and we found ALOT!!! and it was only a 2 minute beach clean 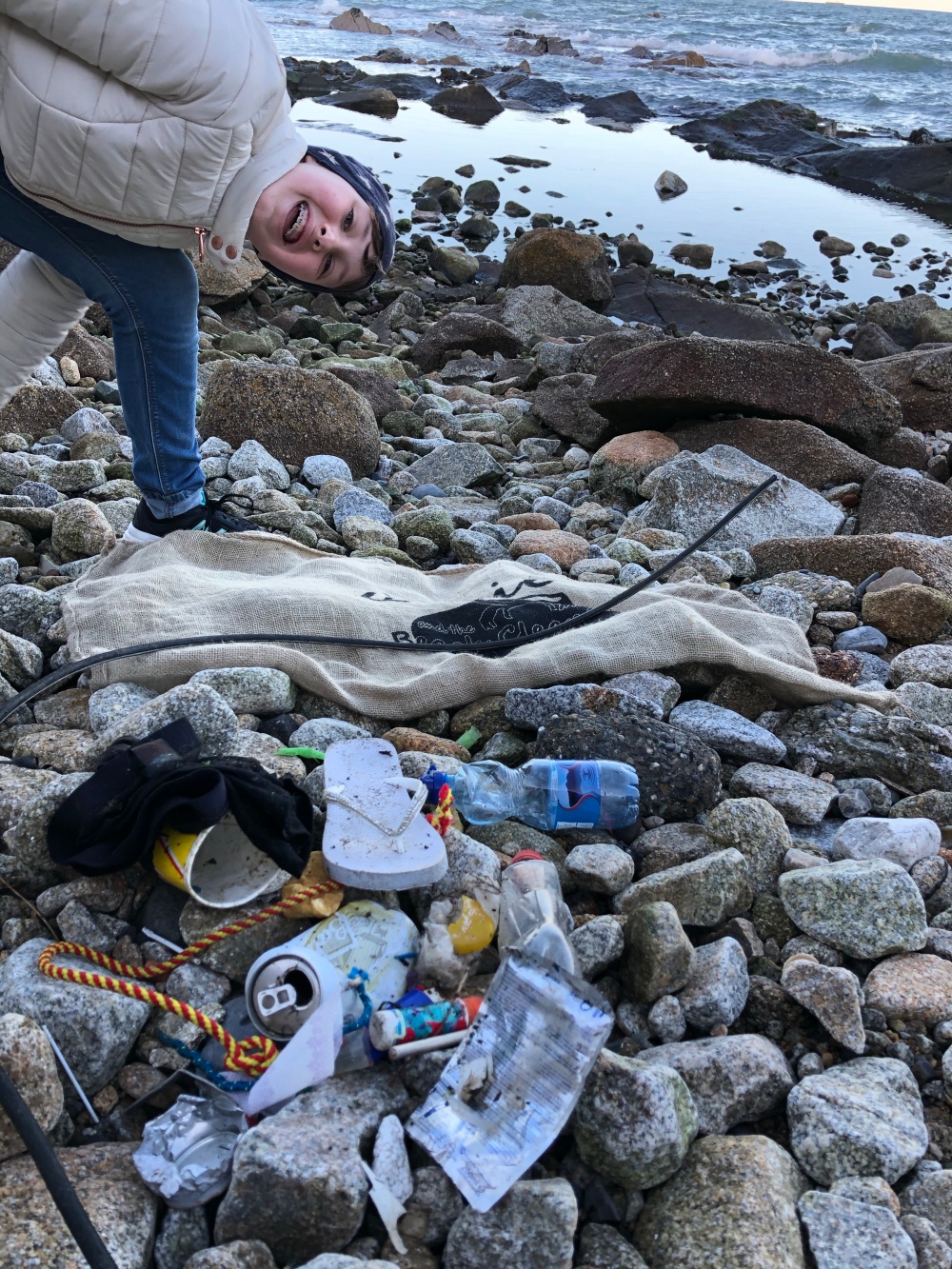 We also went on another beach clean last week and we found so many builders things including lollypop sticks and what looks like the things you use for golf, as well as half eaten PANTS!!!! There seems to be so much rubbish at the moment washing in due to the storms we have been having! 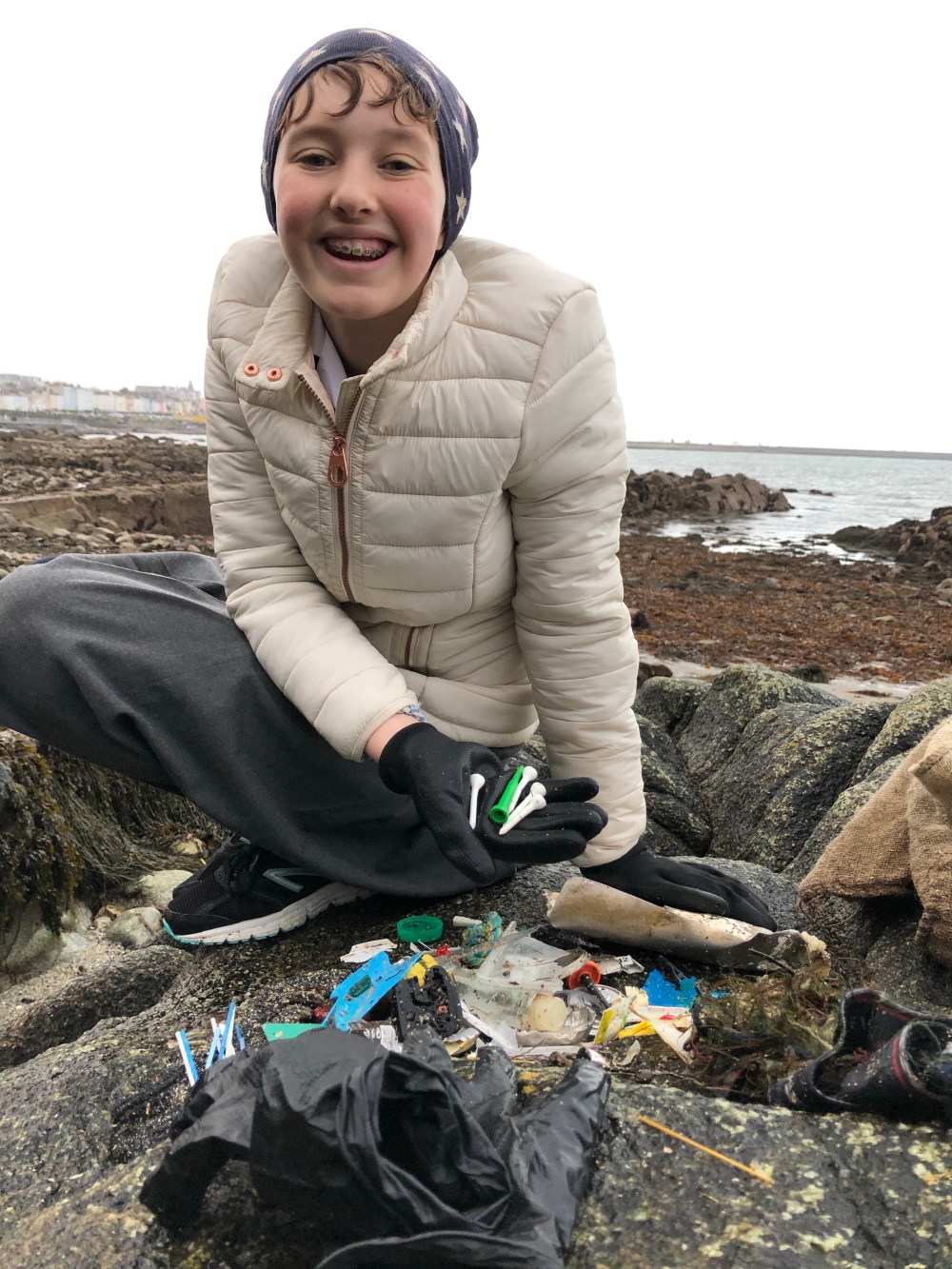 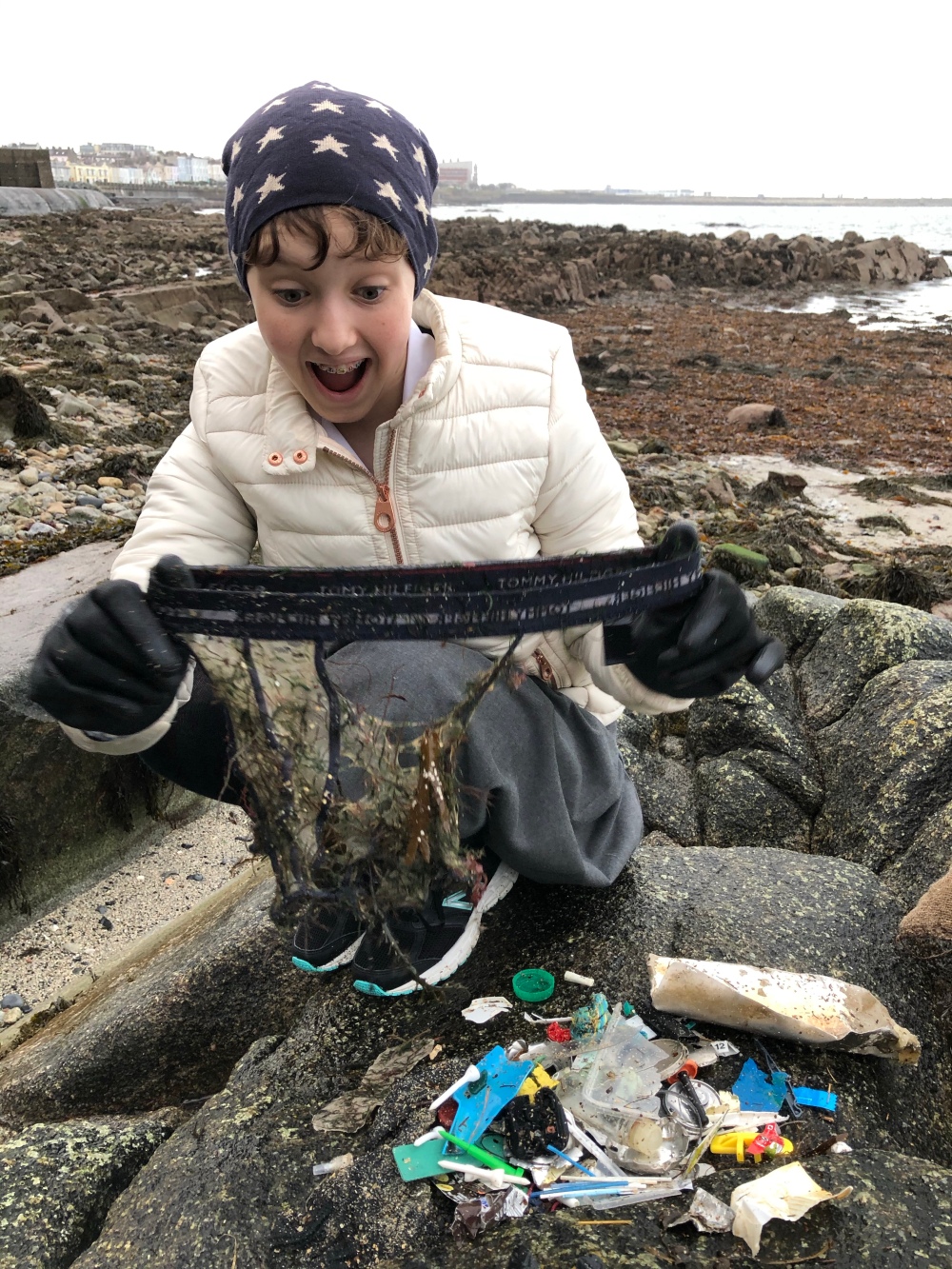 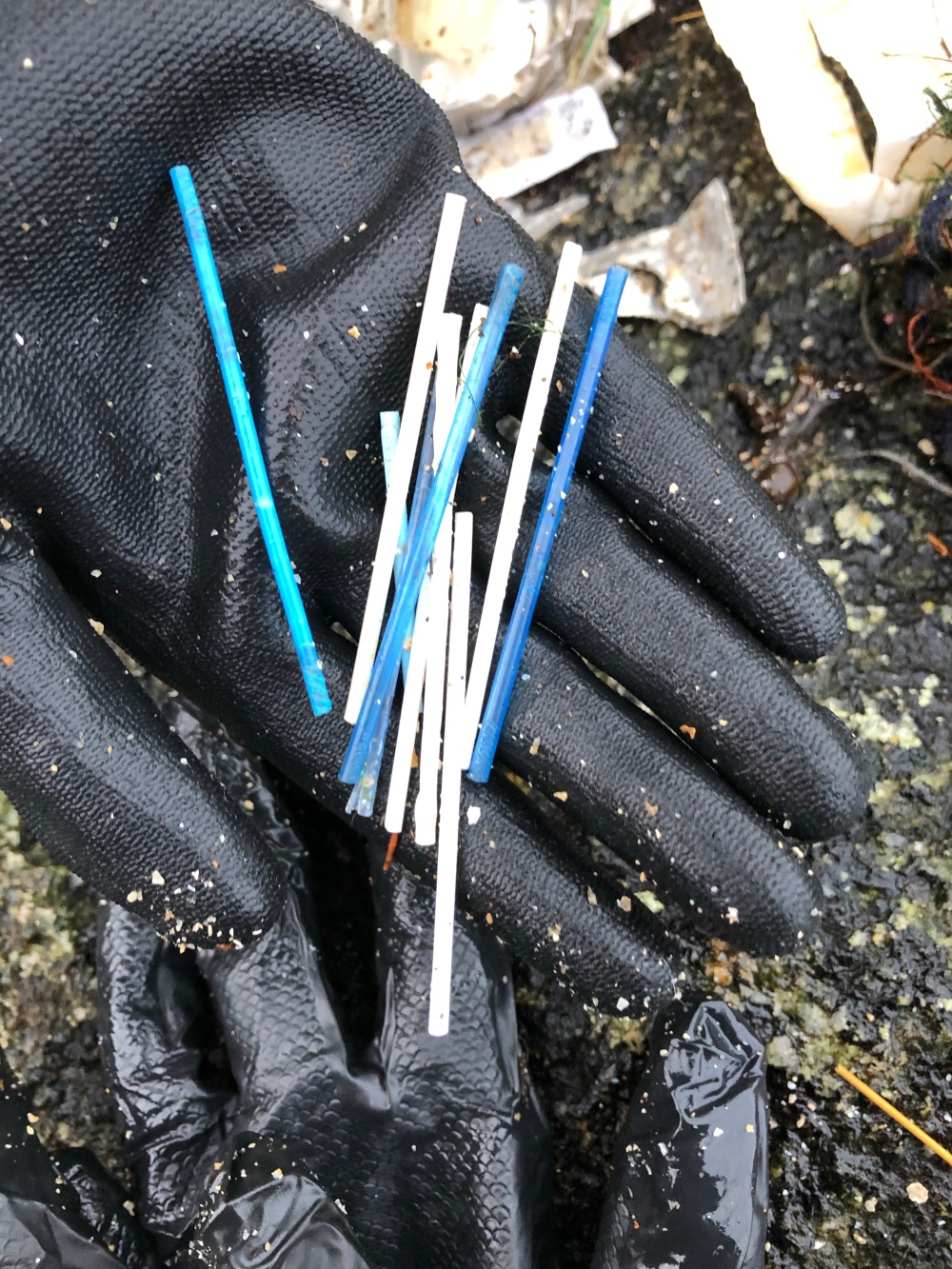 This week I got to meet the TY students my Mum is working with and now it is official we are going to build a paddle board out of plastic bottles !!!

Last weekend I went on a short beach clean because I saw stuff on the rocks so I decided to clean it up and when I was down there I found a traffic cone a bouy and then my Mum and Dad came down and we found a message in a bottle! We were all so excited so  I opened it up and it turned out to be something quite depresssing and very sad,  so we brought it to the police!

This weeks story is called ‘A Girls Best Friend’

Once upon a time there lived a little girl called Indie, Indie was like all little girls except she was allergic to dogs! All Indie’s friends had dogs which meant she couldn’t go round to their houses. Indie was always alone and she always longed for a dog but she could not have one.

One day Indy went to the beach with her Mum and she decided to go for a swim since she wasn’t allergic to the water! While swimming in the sea Indie saw something in the water she went in a little closer and realised it was a plastic bottle with a sweet little fish trapped inside so she immediately open the bottle lid and looked at the fish sweetly and said

Get out of here you stupid unwanted fish and leave the poor plastic bottle alone!

Then she threw the fish out and started hugging and stroking  the plastic bottle continuously saying: ‘are you alright?’ She decided to bring the inanimate plastic bottle home and made it her pet! She brought the bottle everywhere and named it Sniffles, Sniffles was her best friend. One day she brought Sniffles to the beach for a swim! Whilst swimming she let go of Sniffles to see if it an inanimate plastic bottle could swim over to her when she called it, But as she did a wave came over and took Sniffles away!! Indie couldn’t stop crying so her Dad Joe decided to give her his Coke bottle and said

OMG Sniffles is back!

Then he handed it to Indie and she screamed

This isn’t Sniffles this bottle looks nothing like him!

Indie continued crying… Whilst Sniffles was floating around he washed up on a beach in France, but then a man found it and decided to call Joe since Indie put his phone number on Sniffles (just in case of an emergency!), but Joe didn’t pick up because he was still too busy trying to calm Indie down so the man decided just to leave Sniffles on the beach!!

Eventually the tide came in so Sniffles was back floating around in the sea. Meanwhile Indie was STILL crying and was still very sad. To make herself feel better Indie decided to go down to the beach in case Sniffles had come back. She sat there for hours on the beach waiting for something to happen until something did happen, evil people were picking up rubbish from the beach… Indie was outraged and decided to go up to these monsters and tell them how evil they were for taking plastic away from the beach! She screamed at them for quite a while saying how they were monsters.

After Indie calmed down or just tired herself out with her screaming one of the beach cleaners decided to speak to her… ‘Well it’s very nice to meet you but I’m not so sure you’re happy to meet us, we are the beach cleaners and we keep the beaches clean so that we can stop marine animals from choking on plastic!’ then they got out their phones and decided to show Indie a plastic video and how bad it is and how she can help by simply recycling. Indie was shocked and really taken in by all this so she went home and told her parents that she wanted to join these ‘do-gooders’ and beach clean with them.  Her parents agreed and were over joyed with this idea which for once had nothing to do with Sniffle’s!

Indie got right into it and really enjoyed beach cleaning, in fact one day whilst beach cleaning she noticed something on the beach, it couldn’t be…yes it was, it was Sniffles!! he came back to her, she was so excited, she picked him up and said ‘you tried to poison my planet!’ and then threw him in the recycling bin… she felt such victory! But she still felt lonely even with her new beach cleaner friends so her parents decided to get her something amazing, they got her a cat and she got equally attached to the cat as she had done with Sniffles. She named her new cat Honey and was forever more happy and forever more keeping the beaches clean!

This week’s video is AWESOME….carbon pollution from cars made into ink….GENIUS!